By your very existence, you will anger people who want nothing more but to destroy you. You may never meet them, but there will always be people who loathe one (or more) things you stand for. No matter what you try to do to change them or yourself.

If that's the case, I may as well go down the path that makes me happy and brings me meaning. Whatever it is or whoever it pisses off.

Sometimes I look at the sheer amount of programming knowledge I have on my learning list, and get what's basically a panic attack. Shortness of breath, dizziness, anxiety, can't move, even a little tunnel vision.

I think these are caused by a few bad assumptions about how I learn:

Some more correct ideas to go by instead would be:

Of course, knowing all this is easy. Fully accepting and acting on it is another.

What scares me the most is someone who refuses to change their mind.

So much of today's anger, dysfunction, gridlock, violence, and even death can often be traced back to one fundamental flaw in someone. That's being shut off from any new ideas, perspectives, worldviews, compromises, or solutions.

Their mind is shut off like a rock that'll eventually crash into someone.

A philosophy comic has reminded me humans probably have no free will.

The comic's example: imagine you travel back in time one year. You secretly watch a copy of yourself relive that entire year. Since you lived it, you can predict your every thought and action.

Now imagine you're playing The Sims, the computer game where you create computerized people and watch them live. You make their personalities and environment, and how they'll make their decisions. You could watch them live for a year and predict virtually their every thought and action.

These two scenarios are ultimately the same thing. It's hard to claim a simple computer program has free will, so how can we claim humans have it?

All humans are basically robots making decisions based on things we can't control: our personalities, environments, and the laws of physics. We're just a lot more complex than Sims and we don't understand the whole decision-making process. Not yet, anyway.

Also sadly, there's no reset buttons or money cheat codes. Not yet, anyway.

When bored, I've defaulted to this question: "What interesting thing can I make today with anime images I find online?"

This time around, I answered by laser-cutting one of these images into a woodblock as a gift. It's possible with four easy steps!

First, find a good image with a simple background. 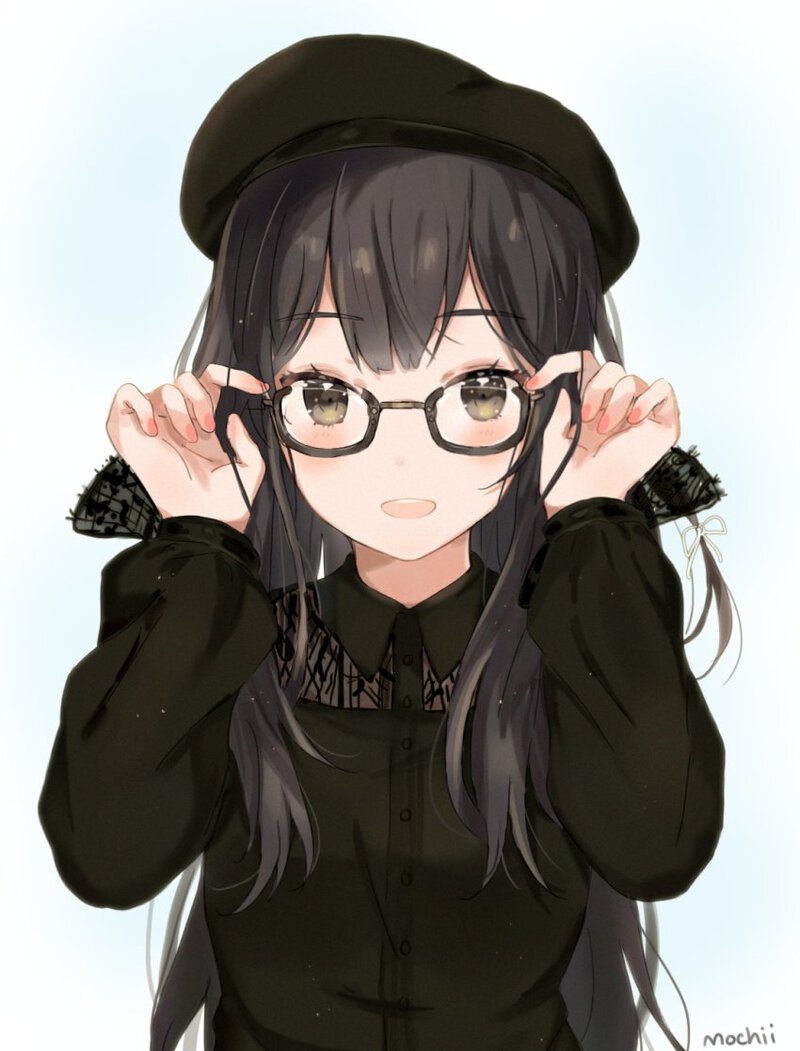 Second, remove its color and increase the contrast. 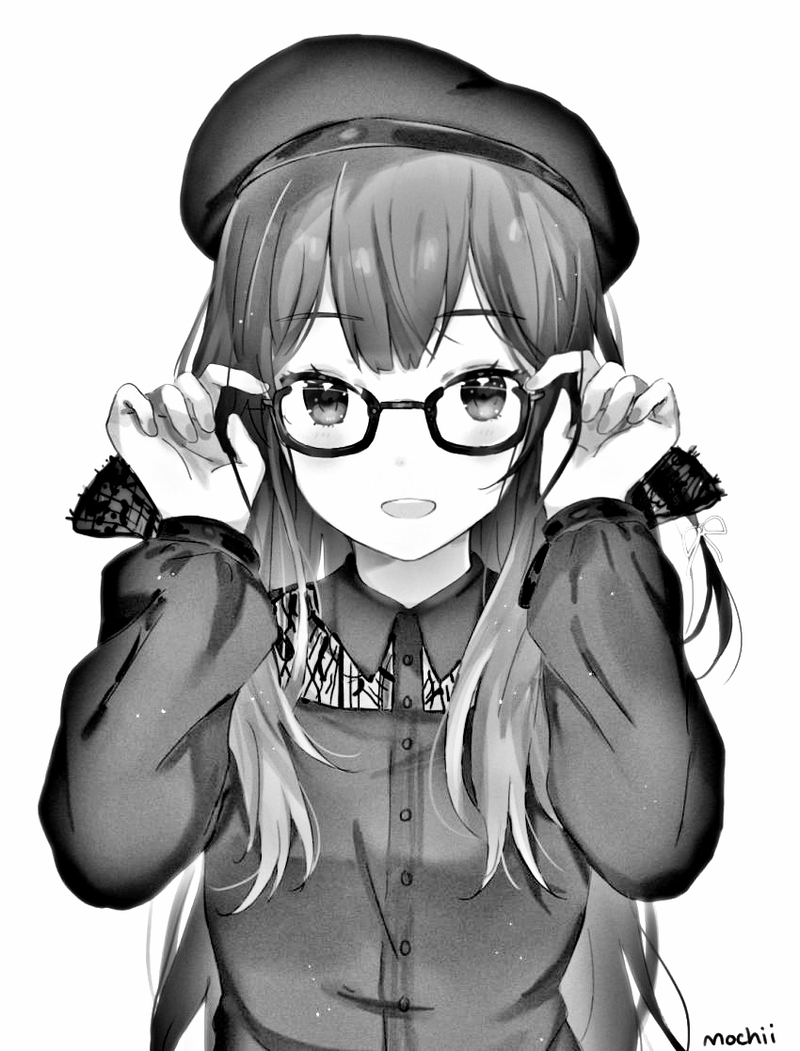 Third, use Inkscape to convert the image into several SVG vector layers. Pick out the best ones, change them to either pure green or yellow, and place them on an image canvas. Add in other elements like a quote or a sun. 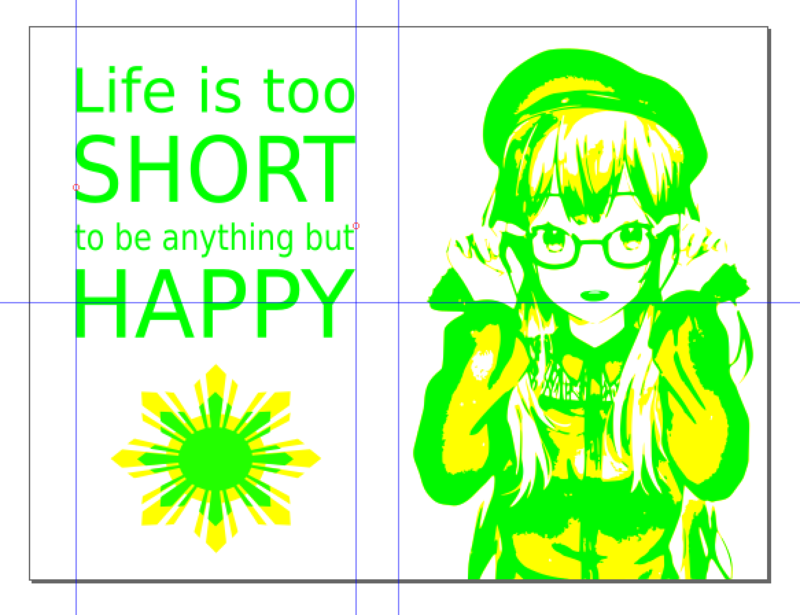 Fourth, plug it all into a laser cutter, put in a standing woodblock, hit start, and pray it comes out okay. 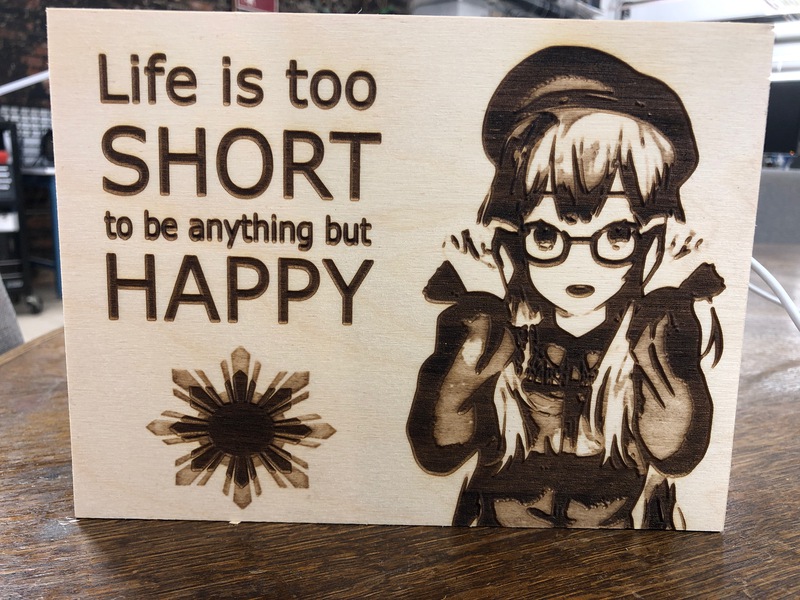 Once all the above are done, dance into the night in celebration!

Many of my online friends handle intrusive thoughts by letting them flow in and out of their mind without feeding them. Feeding them too much attention or mental energy makes them grow, and they wear away at our emotions and mental energy until...bad things happen.

Yet for the past few days strategies like this have failed me, with intrusive thoughts gnawing away at my self-esteem and sense of security.

Turns out, forcibly rejecting intrusive thoughts counts as feeding them in my case. It's the "say you can't think about elephants, and it's all you can think of" cliche. My extra effort to overlook these thoughts ironically made them stronger.

I got around this by remembering not to judge myself for these thoughts. Everyone has dark or unflattering thoughts each day, but they don't define our character. Those are the thoughts we remember, act on, and base our actions on.

So next time a dark thought pops up as I'm walking down the street, I'll think no more or less of myself for it. It just flows into the void, like so many others.

I look back on history and wonder what it like to live in different times. Times without:

I could research what those times were like forever. But I can never experience them the same way. I can't walk down a road from the past, living in an society untouched by today's technology. It makes the past seem archaic, and the present feel futuristic.

On the flipside, people centuries in the future will think the same about today. The future could be radically different in any way, like:

People in the future could be looking back on the present, wishing they could find the experiences we take for granted each day. They could long to know what it's like walking down a street of planet Earth without fear of radiation or robots looking to enslave them.

We are living the history people will someday wish they could go back and experience, even for a moment. How incredible is that?

It's easy for me to look at large-scale horrible news (repeating government shutdown, anyone?), and get so cynical I shut myself away with video games.

Those big problems will always be there. But it's more pragmatic to focus on the smaller, local things that are actually productive or can make a difference to someone.

Maybe not everyone, but someone. That's better than no one.

Cynicism is another bad feeling pulling our minds like gravity. But it pulls us away from things that can alleviate that cyncism - meaningful activity, other people, and the liquor store. So pulling away is a daily fight.

I've often been in the stereotypical "in my apartment staring at an empty file" situation.

Quick fix for this? Leave the apartment and go somewhere else. For example, I'm writing this from an undislosed location filled with saws, lasers, power tools, and a burning smell in the air. Sure, I'm not writing anything interesting, or much at all, but it's more than nothing!

Home is for relaxation. My brain knows that, even if I have a hard time remembering it.

With programming, there are times when I'm balancing time between two side projects. For example, these side projects could be:

When I'm torn between two weird Pokemon code projects, I know I'm in the right field.

Good creativity doesn't occur in a vacuum from the "creative mind," whatever that means. It's not from a simple desire to make something flashy and get attention, since there's simple (and often annoying) ways to do that. Just look online.

I should ask myself a different question when bored. It shouldn't be "how can I be creative?" It's "what problem can I try to solve?" It can be big or small, as long as I find it just challenging enough.

I was recently asked "where do you want to be in ten years?"

I had no real answer. I still don't.

But I don't think I need to yet. It's still early enough in my life. I can go in the right direction without knowing my specific goals.

Someone can know they need to head north, but not know exactly where for a while. But I need to get an answer ready when just "north" isn't enough.

As a front-end developer, I think Ruby may be my favorite programming language I've used the least in my career.

I've fiddled with Ruby before, but I reached the point of using it to pull off all my once far-reaching ideas. It's easy to take a goal like "scraping the web for my favorite anime artwork" and break it down into several classes. Each ones is easy to manage, fun to optimize, is a great cook, and will automatically email me great images like this each day. 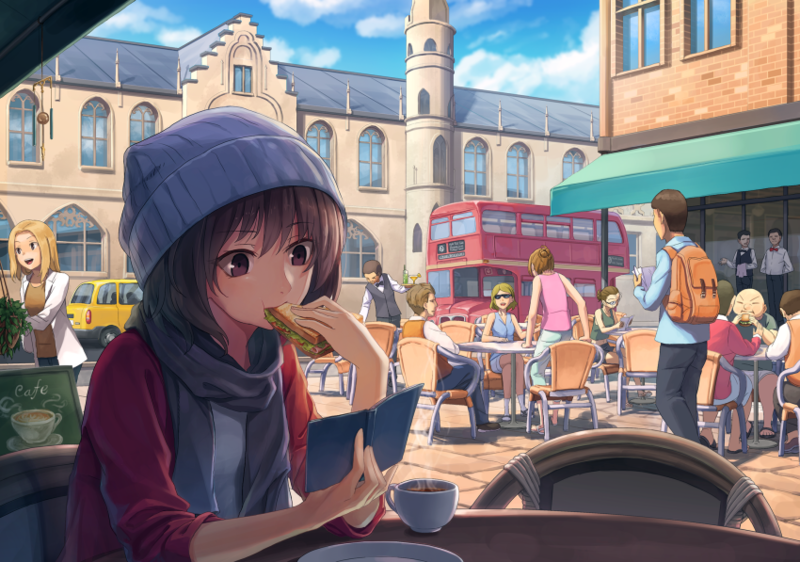 I don't think this means I'll go full-stack, or someday move entirely to the back-end. But having another tool to play with, expand my thinking, and have some cheap thrills with on the side never hurt. It's not like my repos of CSS and JavaScript will find out, right?

But every day can't be like today, where I stay at work thirty minutes too late, lost in the eyes of a Ruby module. There's a thin line between love and a crazy code obsession, Ruby. Let's not let things get so off the rails that we find ourselves lost and full of regret inside a Rails app.

At least not right away.

I'd argue it doesn't matter, since regardless of order, the result is a downward spiral of both.

The best way to break this cycle is writing anything, even if it hurts. As long as it build momentum and carries the self-esteem up with it.

I wrote before about good writing being a habit. I didn't write about how if I let my guard down at all, those habits will shrivel up and die off.

Vacation time is all about relaxing. But what makes a good relaxing activity?

During my own vacation to New Orleans, my favorite ways to relax are:

My favorite ways to relax here are (mostly) simple things that keep my mind at a gentle hum instead of at full throttle. I'll indulge in an episode or two of Bones, but eventually my brain gets antsy. A life without thought, however small, feels like a wasted one.