Especially pineapple on pizza. I will do humankind a long-term favor and bury these people alive. You're welcome, planet Earth.

Recently in a local Slack group, I shared a tweet from someone dissing Ruby on Rails. While this is unforgivable, that's not what this note is about. Part of the context was a woman being hired in an all-women company.

To be fair, I mistakingly said the company only hiring women was intentional when that wasn't the case at all. But even if I hadn't, the question was already being raised about whether this was legal, discriminatory, sexist, or any number of other things.

I'm not going to get into if it was any of those (although it wasn't). But like in that conversation, I'd like to acknowledge if the company was only men, those arguments would never have come up. There are lots of tech companies made up entirely, or almost entirely, of men where this is virtually never brought up or taken seriously.

If I may quote Sara Eckel from her book, "It's Not You," she sums it up pretty well:

Freedom is arguably our country’s most sacrosanct value—unless we’re talking about women’s liberation. Then suddenly we become cold rationalists, debating the pros and cons like a Soviet-era dictator.

Go to my Instagram today and you'll start with photos of my fancy anime woodcut blocks. You likely already guessed this, but I only spend a fraction of my time making those. Those six photos were taken over several weeks.

Most of the remaining time I had was spent reading, coding for my job, watching videos, trying to catch up on news or code articles, playing video games, or walking to get away from everything else on the list. Pretty standard things that we always do ourselves but are boring when we see others doing them. In other words, everyday life.

Most of my life isn't spent on something cool or edgy. But they're the only ones I think are worth sharing with everyone. But most of my life will still be boring from an outside perspective, and normal yet enjoyable from my own.

As an added bonus, people who see them will think I'm a naturally motivated, discipline person. As opposed to the truth: I'm a typical lazy, distractable human using mental tricks to avoid those impulses.

There are many ways for programmers to learn and improve, such as:

I've been a big fan of methods around research and notes. It's worked for a long time. Lately, it hasn't been working as well. My motivation and inspiration are drying up, and my anxiety and impatience are building up in their place.

My guess is I'd been catching up to the code I'd been writing but not researching. Now I'm just about caught up and unsure what to do next. If that's the case, the answer is blending some code projects and experimentation into my writing. A possible flow for this could be:

As always, I can't predict if that'll work for me. Also as always, I need to try.

I wanted to like a library book sale purchase of Rogue Lawyer. It had an intriguing premise, thought-out characters, and some gripping court scenes. But I can't quite like it since handles the "multiple plotlines" structure poorly, especially at the end. There are a few elements this structure needs to work, and the book fumbles each of them.

Want a book that does this right? Read "Big Little Lies." You'll thank me later.

Someone may feel they need a relationship for a satisfying or meaningful life. But isn't that an insult to the rest of your life?

Hopefully, one's life isn't just window-dressing for someone else's benefit. You're the one living it, not them.

There's many times that, when left alone with my own thoughts, I feel nothing but dread. Whatever the topic is, touching on it opens a gaping chasm beneath me only separeted by something thin, fragile, and invisible. It happens mostly on Sunday nights and I don't know why.

I think it's best to hold onto those topics. A path or idea that scares me is always worth exploring. I either find something I should have embraced sooner or will know, with certainty, to avoid. The end result is always worth it.

However, finding these potential paths is actually easy. The hardest part is gathering the guts to follow them.

Still working on that. I may just be at my most cowardly on Sunday evenings.

If we actually saw how much free time we had each day, would we spend it differently? My gut tells me seeing the concrete number of hours and minutes we can use freely will remind us how precious our time is. It'd force us to find priorities and set limits we were afraid to set but ultimately are for the best.

Let's test it and say you had five cumulative hours a day of free time. How'd you spend it?

One of the toughest questions I’ve heard is “where do you want to be in five to ten years?”

It’s hard to answer since there’s little about our future we can seriously control. Any number of outside events influencing our career, family, home, or love life. We just choose which events or opportunities to go with when they arrive.

I'd prefer to set broader goals or preferences for how to approach the future. Goals like "I want to work in this general field" or "I want to make family the main priority." But the more specific I set them, the more I risk setting myself up for failure. So I’ll avoid too-specific future goals for now.

Besides, I'm not sure what those specific goals would be right now. I'm lucky I've still got time to figure it out.

Lots of people (mostly well-off white men) complain making sites accessible is tough and they don't want to do it.

You know that thing when someone brags about making life worse for screen reader users out of spite, and you think "wow, that's an empathetic, intelligent person worth taking seriously!"

I have many guesses for why they respond this way. Many guesses. Guesses I sometimes feel like yelling. Or guesses I want to spray paint on their garage doors. But I think the most powerful reason is they find it boring.

I'll concede things like semantic HTML, readable text, and keyboard interactions aren't as sexy as new JavaScript frameworks or GraphQL. But they're still part of the job. Our job as web developers is to, you know, do the damn job. 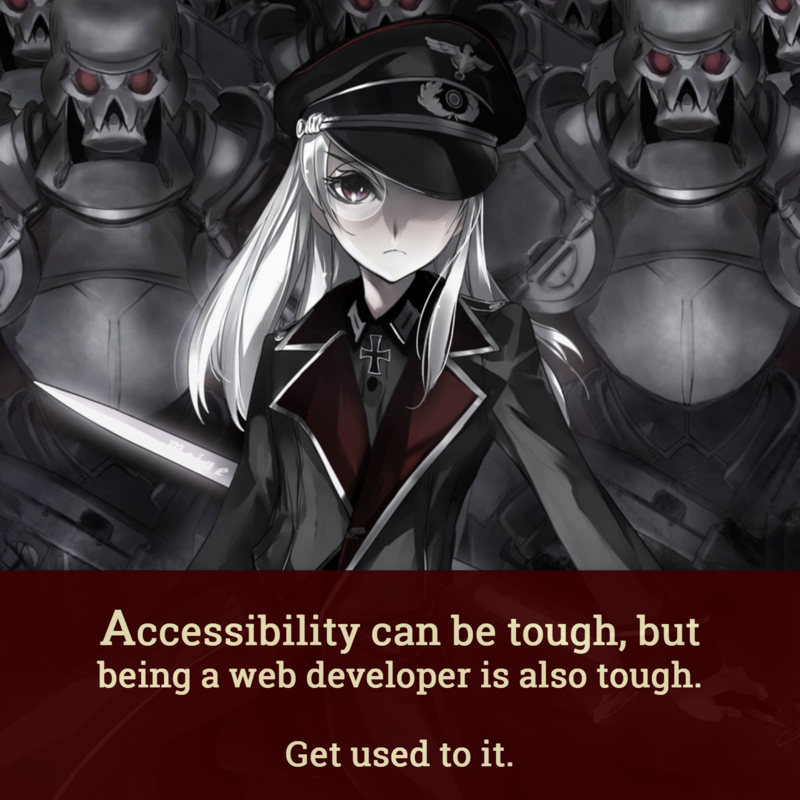 It's frustrating since I made this same point in a past article and need to keep sharing it.

A common definition of freedom is being able to make your own decisions, instead of an authority making them for you. But is that enough to be free?

This doesn’t even consider that groups could change your data without you knowing. The potential effects it has on your life paths and possibilites are huge. The reasons could range from malicious to accidental - regardless, you'd still have no control.

But it shows the more data is gathered about us, the more our "freedom" is at risk.

Some signs you're in a bad mood:

These may just apply to me. Regardless, they're good to remember to hopefully catch your bad mood early. Eat a cookie, get to bed early, and dream of rainbows until it's over.

Like the single people among everyone, the loneliness strikes harder.

Like the socially awkward introverts among the single people among everyone, it's hard to handle the loneliness.

Like the writer/coder nerds among the socially awkward introverts among the single people among everyone, I create an anime image of the self-love quote that gets me through it. 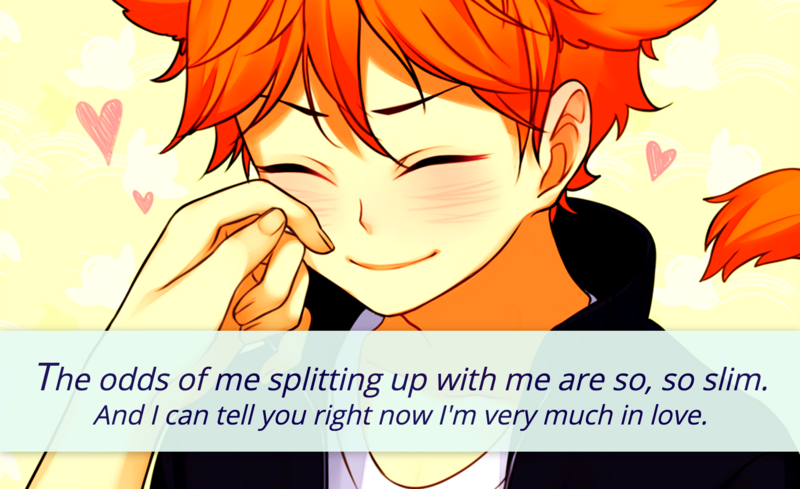 May it also help others in this (admittedly specific) subset of people dealing with loneliness too.

For the last month and counting, I've either been sick with or recovering from something. These include:

My usual attitude to all these would have been "let's not work on anything serious until I'm better." But when it takes weeks to reach the "better" point, it becomes less about waiting and more about wasting time.

So while I'm still dealing with some mild things now, I don't plan to stop. This includes current goals like coding and MakeHaven projects and new ones like learning the piano.

Unless I somehow get strep throat again. That's more than an illness. It's a Satanic possession of the throat no amount of cough drops or holy water can cure fast enough.