Happy Valentine's Day. Today I shall rant about books.

I gave "The Overton Window" a shot. I saw the author was Glenn Beck, the original political conspiracy theorist of my childhood. I saw the plot was a recycling of his usual ideas. I saw people giving me funny looks when I brought it home. I accepted all these things and tried to forget them as I read it like any other book.

I tried, I did. But I could not finish it. But I'm certain it wasn't from my biases against this man. Instead, it was not a good book. It wasn't good for many reasons, but I'll focus on two big ones.

I'm all for books having political views. I've read plenty along those lines along the spectrum. But I'm not for badly-written books.

A friend of mine has opinions on how asinine the American health insurance market is. They drove it home by imagining if the fire department worked the same way.

If all that sounds absurd and terrifying, just imagine if we also needed insurance for the police department...

We can leave it to manga to make everyday things our body does into something badass.

Let's take one of my favorites, Cells at Work: Code Black. One scene is, on its face, just someone getting gout. The make it compelling by mixing in existential crises, violent protests against a faceless and abusive ruling body (pun intended), and cries of despair to the heavens. All as it explains the basics of gout and its treatment.

There are times where, despite my love of manga, I struggle to love it. It's mostly due to the high amount of smutty, fanservice content one sees. Especially when fanservice gets in the way of an otherwise good story and characters.

But then I read a manga chapter that almost always brings me to tears while talking about uric acid and colchicine. Moments like that remind me why manga is worth fighting for.

In Brave New World, Huxley draws many parallels between World State citizens and infants. There's little to no gap between when they desire something and when they get it. This lets them go from pleasure to pleasure with no delay or real effort. There's no need for self-control, so no one ever develops any. So they become slaves to desires and can't pursue anything else.

I agree with the point Huxley made, but I think this is too unfair to toddlers. Toddlers have the potential for self-control and are raised to develop those skills over time. Meanwhile, in the novel, toddlers are conditioned through shocks, whispers, and...other activities.

I'd argue the citizens are more like animals, like cats or rats. At least toddlers have the potential to pursue meaning, and World State citizens don't even have that. They're also like rats since, whether it's electrical brain stimulation or soma, they will indulge until it kills them.

At least World State citizens had stringent birth control to avoid the rats' population growth rate. But they also don't make babies in fetus jars on a slow-moving conveyor belt, so I'll just call it even.

Every now and then I remember that at any moment, some uncontrollable or unpredictable event could upend my life and set me on an irreversible new path.

It could be something good. It could be a new job, a new partner, a new family, sudden superpowers, or getting whisked away to a secret society that maintains orders in society's shadow.

Or it could be something bad. I could be thrown in poverty, important family and friends could die, I could lose limbs or senses in an accident, or be psychologically scarred for life by something like my apartment burning down.

All these bad possibilities make me want to chase lots of short-term pleasure. But if none of them do, I'd be destroying all the good long-term possibilities instead. I have surprisingly little knowledge or control over my future, and I need to make decisions for it all the time.

We are all in uncontrollable ships flying in the chaos of the universe with no idea where we're headed, why we are, or when the ship will explode.

But at least we have peanut butter. That always helps.

One of the most important yet bitter lessons of adulthood I've found is this:

Maturing is realizing how many things don't require your comment.

This quote tears me between "write more" and "don't write unneeded things." It brings up lots of stress, so I make the pill easier to swallow with some quote art. 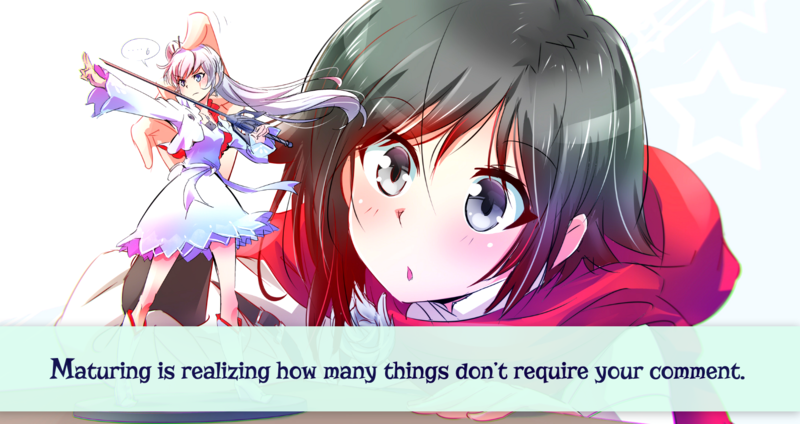 When in doubt, add some good anime.

A common talking point in politics is along the lines of "give Americans their freedom and they'll solve it all. Their productivity and motivation are just waiting to be let loose.”

To that I respond, seriously? From what I see, most are happy to put their extra time towards noise and distraction. There’s a time and place for those, I admit. But they’re taking up a lot more than I’d expect is needed. If people had more time, many would just put it towards those distractions.

It’s good to compare the books “1984” and “Brave New World” here. The former argued freedom must be taken by force. The latter argued people given so many pleasurable distractions willingly give up their freedom.

Which one is closer to most societies today?

With recent Iran events in the news lately, I think it's good to remind ourselves how to spot war propaganda. This article has lots of good points on what to look for in the news, why it's propaganda, and how to respond. I recommend the full article, but some of the takeaways are:

Just after Christmas, I used some gift cards to buy some manga volumes. They only arrived a few days ago, so I waited for around a week. Knowing I was going to get something nice in a few days always brightened my mood. It was having something pleasant to look forward to.

In a way, canceling Amazon Prime didn't just save me money. It saved me from impatience. But mostly money.

There was once a person who spent three hours on a Saturday walking. They walked down a street, along a trail, atop a small mountain with some deer, across a park, rested on top of New Haven's East Rock Summit, and then went home.

This person was exhausted and talked to no one but themselves. They expected it to be lonely but instead felt invigorated. They'd enjoyed being so close to nature, pondering answers to some personal and existential worries, and the satisfaction of collapsing home in an exhausted heap.

As the person was in this collapsed heap, they saw a laser print they'd made a few days ago. 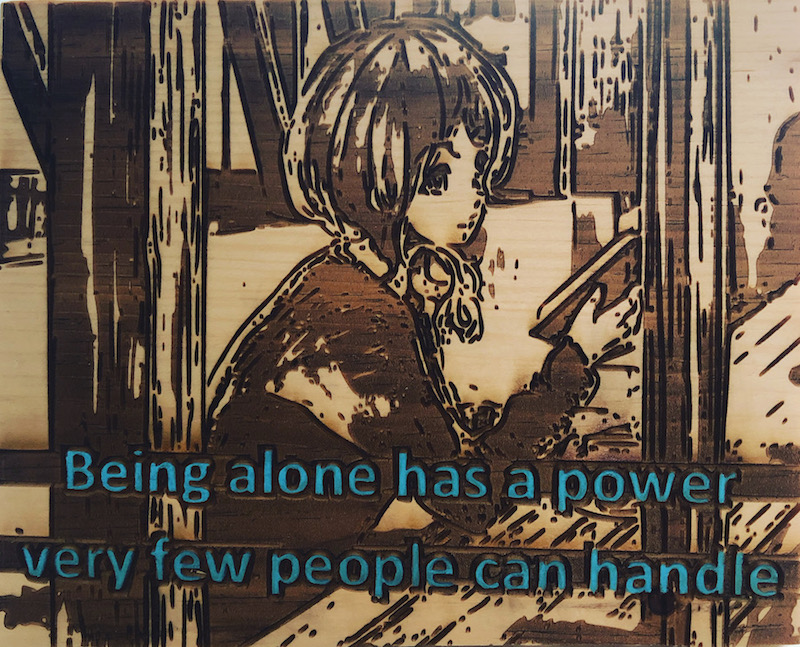 Proper solitude had brought them peace of mind amid anxieties that'd hounded them for months. Plus extra tone to their legs they know looks amazing. But mostly their peace of mind.

Next time you have some alone time, I recommended going somewhere where you can only walk and think for an hour or two. You'd be surprised how helpful it can be.

Last night, Edgerton Park in New Haven had their 2nd Annual Winter Solstice Luminary Walk. They lined the park's path with candles, so there was enough light to follow the path. You could only see other peoples' silhouettes, not their faces or clothes.

This setup rarely happens to me but always find it intriguing. I can't see the details often used for value judgments, like clothes or attractiveness. They're simply people like myself. Knowing only, I assume they're just as complex and worthy of basic respect as I am. That took away much of the usual social anxiety I experience around others. I don't fear how I may judge them or they may judge me.

Part of me wishes life could always be like this, with a veil of ignorance over how we see people. So many dark paths of history likely would have changed or never happened at all.

But another part of me is also upset, knowing we'd need something like that to treat others better.

Some consider vacation time for exotic travels and adventures.

For me, vacation is about relaxation and enjoyable work. It's remarkably easy to do this without the hassle of airports, reservations, packing luggage, travel schedules, food poisoning, sunburn, and those other things that make exotic travel "relaxing."

Some may think I'm wasting my time or youth by traveling less. To that I say, good thing I'm the one living my life and you're the one living yours. Not the other way around.

I have no issue with the "we're all brains in jars" theories if they're real. I can handle if reality itself is an illusion because of virtual simulations or a seriously bored demon.

My issue is with the reality I'm being fed. If you're going to feed me a fake life, either give me an unbridled paradise or a terrifying hellscape. This middling "distraction and anxiety-filled disintegrating society" version isn't cutting it anymore.

Older generations often get mad at younger generations like Millennials for having different values. These range from the serious to the trivial, such as:

I don't know if any of these value shifts are good or not. I do know older generations shouldn't assume they're bad or shouldn't happen.

The reason is simple - values changing between generations is how society grows. This repeating pattern of change-anger-acceptance isn't new and isn't going away.

Especially pineapple on pizza. I will do humankind a long-term favor and bury these people alive. You're welcome, planet Earth.