America is still counting the votes, but it's a close race.

America is having a tough time deciding if they want to give a man, whose pandemic response killed over 200,000 people and will likely kill at least 200,000 more, a second chance. You know, that guy whose poor handling shattered economic livelihoods and regular life across the country while other countries have beaten it.

The country is having a hard time deciding if they want to give him a second chance.

Biden winning won't make any of that go away.

There are lots of good reasons not to commit murder: morality, prison time, emotional trauma, being out of dishtowels for cleaning, or you're about to do it but notice a stuffed animal staring at you and are worried what it may be thinking. These are all equally valid reasons to avoid ending someone's life.

But I think the best disincentive many people now have is this: they've killed people while playing Among Us and know how stressful murder is.

Here's a scenario that's likely happening across the world: someone was planning to murder someone. But after playing a few Among Us rounds as the imposter, they thought, "this is so stressful! I can't handle this in real life." So they packed up their knives, put the disinfectant away, saved all their romaine lettuce for a salad, and went on with their lives.

Future studies will show a large drop in the murder rate around this time. Thank you, Among Us.

Do you think history and society would have changed if our sky was a different color?

Colors can have a large effect on our mood and imagination. A blue sky could have given humans made us calmer and sadder than we think we usually are. Red skies could hypothetically have fueled more feelings of power, rage, and lust throughout time. The result could be a world different in any number of ways - more sex-positivity or mass incarceration, polyamory as the romantic norm, still having slavery, or anything else.

What could have changed if the sky had been yellow? Or green? Or purple? Or polka-dotted? Could such a simple change in the world have such a drastic change on human history?

There are times I question the entire system of society we've built up.

I think of all the luxurious things humans created — television, movies, cars, airplanes, boats, video games, and the like. How many serious needs did they fill at first? Or are they things we only wanted once we knew about them? Then after having them around so long, we now think of these wants as needs?

Sometimes I wonder where the line between “unexpected need” and “manufactured desire” is drawn. Wherever it is, a big chunk of society always falls on the latter side. Then I ask, "how much is a society built on selling wants disguised as needs worth?"

I'm starting to realize life is less about how far you go and more about going a little further each day. It gives you room to find joy in the short-term and build success for the long-term.

The medium-term can go to hell.

"Love the Neighbor" seems like a solid Christian saying for being a better person.

But how does the saying apply to someone in your neighborhood that's homeless? If you live in a pack apartment building, do you love just your immediate neighbors or everyone in the building? If you live in a gated, white Christian community, do you still love people outside it that you don't see often?

Isn't it just easier to say something like "love everyone around you," "love your fellow humans," or even "don't be a selfish jerk?"

I've noticed people often get into an existential panic about the world potentially being:

None of that changes that, whatever this world is, it feels just as real. It treats us the same and gives us the same sensory perceptions and feelings of who we are. When something makes us laugh or cry, it gives us the same feeling of joy or sadness, whether it's real or not. Isn't that enough for us to accept things as reality?

But it may not be a good enough silver lining for the "we are godly mucus" theory.

Time for a thought experiment!

Let's say a frontline healthcare worker caught COVID-19. Considering the positive work they do for others, and how they likely have good character, most people would hope they recover from it.

Now let's say a famous dictator in history caught COVID-19, like Hitler or Mussolini. Considering the deaths and societal damage that happened under them, and that they just weren't good people, most people wouldn't hope they recover. Instead, they'd be glad they got infected and be happy if they suffered long-term health complications or even death.

I'm not drawing a parallel between fascist leaders and anyone else here. But this shows most people would take a person's character and effects on others into account. Between these two extremes, there's a wide range of good and bad wishes we'd have for people infected with COVID. This proves the statement "we'd never wish this disease on anyone" to be false.

All this is something to remember in case someone, or a group of people, tries to gaslight or manipulate you into feeling differently.

Here on New Haven's Orange Street, there's a place called The Audobon. It has a gym, a store, a rooftop lounge, and a restaurant on the ground. The restaurant, oddly enough, has fencing around the outdoor tables.

I didn't know why such fences were needed until I looked across the street. People outside are right across from the New Haven Housing Authority. Where citizens go for housing assistance and often wait outside in a large bench area.

Were these fences added so tenants didn't need to see the less-fortunate as they eat? To avoid the cognitive dissonance of living in expensive, self-indulgent housing while watching those in public housing? To avoid grappling with how homes like their reinforce structural inequality in society while they enjoy their cocktails?

I can only speculate.

As we mourn the loss of the Supreme Court's liberal icon, Ruth Bader Ginsburg, I can already hear the hypocrisy attacks from either side.

The main difference is, in 2016, it was at the start of the year. This year the election's less than two months away. But that kind of nuance gets lost when party leaders focus more on discrediting the other and justifying themselves to their base.

As if we didn't have enough of that already.

You ever get a phone notification and stare at it a while? I'll admit I do. When I'm feeling even more lonely and isolated than usual, a notification icon is like a drug.

I stare at that notification icon, even though I know it's unhealthy. I know it's reinforcing the idea that I need others' attention for validation. I know that idea is poisonous and plays into tech's goal of stealing our attention.

But I keep staring, taking in the pleasure, and knowing the long-term costs. I feel that warm comfort that will, slowly but surely, burn part of me to cinders. I take the drug again and again.

I've gotten many reasons for why someone didn't reply to my texts. But recently I got my first "someone suddenly gave me a baby that got too comfortable and I couldn't get rid of it" excuse.

I consider it a modern adult milestone. It's also a good reminder that in a time when many people (like myself) cling to whatever digital or in-person interactions they can get, things like taking care of babies are still more important.

Granted, I should already know babies are more important than texting. But during social isolation and distance, a few reminders can't hurt.

A hallmark of Stoicism is realizing that we can only control our inner worlds, and accepting we can't control most of the world around us. Part of that is focusing less on events and more on how we react to them. But I've realized it also affects how we chase our goals.

If you work towards a specific, tangible goal, something could happen that takes it away. For example, you could aim to own a house but are never able to afford one, find a good one, or it keeps getting burned down by demon salamanders. The world can take these goals away, and there's little to nothing we can do.

From a stoic perspective, it's better to take action based more on values than specific goals. If you value independence, you can always find other ways to achieve this without owning a house. You can cook or clean for yourself, pay off any student or credit card debt early, or learn how to wield spears for salamander hunting. They're not buying a house, but they're ways to express independence at that moment.

Most importantly, no matter what form your values take, living by the right ones means no regrets. And no salamander burns.

You ever have moments where your mind is so restless and thirsty for something new, you get pulled into a spiral of browsing and reading? It usually ends with a purchase you forget about a week later, reading something you realize you don't care about, or hate that you wasted breakfast time on a dozen empty Google searches.

I invite you to guess which one of those is me right now.

With so much choice in society, it's easy to think "I need to find the exact kind of thing my mind is looking for." But finding something so niche can take way too long, and the more niche a desire is, the more likely is to quickly fade. So is the effort of chasing a ghost of desire really worth so little?

It's not worth skipping breakfast for, I can tell you that. 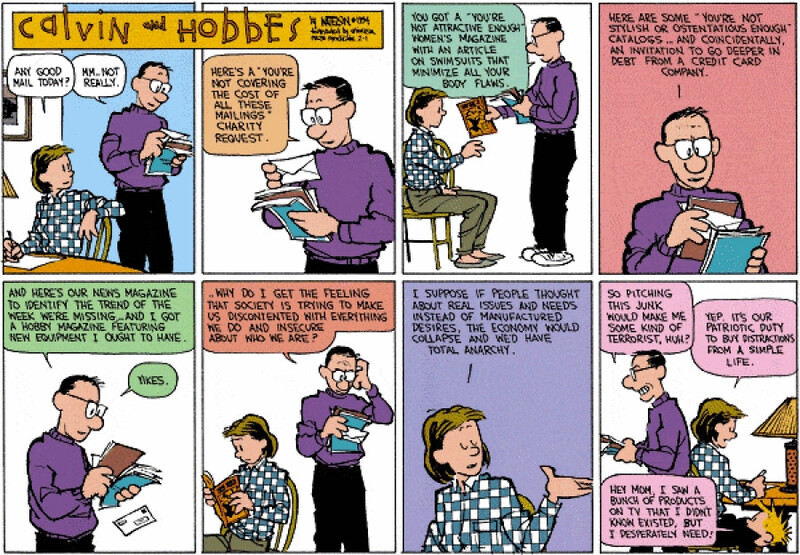