One part of a useful book, “How Not to be Wrong: The Power of Mathematical Thinking” always stuck with me. It was a section about circles.

It’s fair to say we’d all recognize a circle if one was drawn for us. Our brain would see a shape that’s curved, with no straight edges or lines, and go “oh, this is a circle.” It’d be pretty obvious.

But if you zoom in on any part of a circle, the curve will get smaller and smaller until it’s so subtle, it looks exactly like a straight line. Someone could take this close-up and shout, “Look at the straight line in this shape! It must be a square!”

You could tell this person that while the line looks straight, if you zoom out enough to see the whole shape, it would be a circle. You could explain how looking that close would make any line look straight, and then some of the nuances of shape and perspective.

You’d also likely be cut off as the person kept yelling, “I clearly see a straight line in this shape, so it must be a square! Squares have straight lines, so this is a square!” They’d also pull up other close-ups of the circle and say how all these straight lines are different parts of the shape, which is more proof it’s a square. 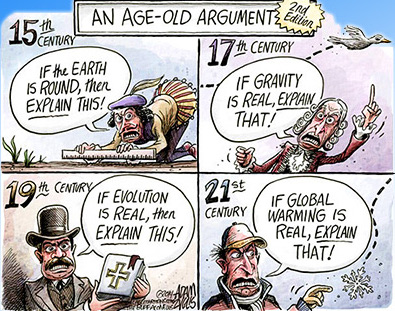 Take this logic of ‘narrow focusing’ and you’ll get the essence of most discussions today, online or otherwise. Once someone latches onto a few narrow focuses of an issue that confirms their biases, its easy to wave them around as simple, straightforward evidence and pithy responses for why they’re right and won’t broaden their perspective.

I see two common responses to this:

My advice? Take the second approach and do something productive instead.